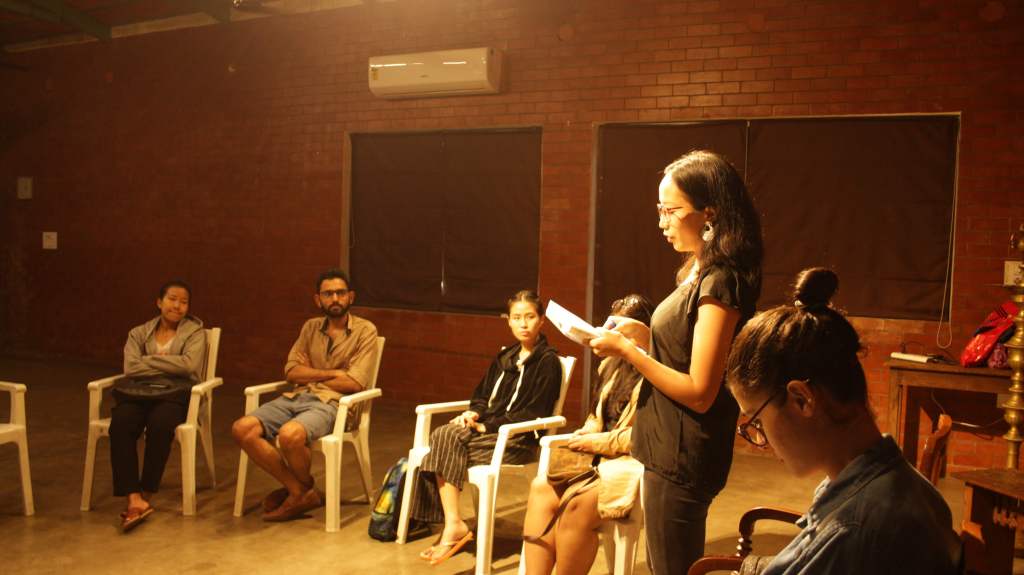 One of my friend recommended me to be a part of a discussion which was about the exploring of sexuality, by reading of Kamala Das’s poem ‘An introduction’. She told me that it was to be held in Atta Gallata, Koramangala. I really didn’t know if I should go or not. I mean I was too confused but later on I made up my mind to go and be part of the discussion.

In case you are wondering, why did I go there or what made me go there . To be honest I didn’t go there because I am a feminist. I went there for poetry. I mean poetry is said to be something that moves our souls beyond this world and helps us to connect overselves with the cosmos. I am a huge fan of poetry. I love reading and writing poetry. I often sit in my balcony, sipping coffee and I write or rather I should say I spill  the ink. Poetry, for me its magic. It’s a living, breathing presence in my life. People often tell me that I write well. To be precise I write a lot of Urdu poetry. It carries huge amount of value . It’s deep, sheer and perfect. And rightly so.   But I panic a lot . I have social an anxiety so I don’t have the nerves to face the stage or be a part of any discussion.

When I came to know about the fact that Hidden pockets is organising a program about poetry, and its about Kamala Das. I was really happy to hear about it  but as soon as I came to know that it is not just a session but a discussion and each one of us have to speak and talk, I was really anxious. I mean I wanted to go but then the fear of facing the audience made me worried.

Somehow I made my mind and went there. To be frank enough to say, I was little shivering as I sat under the spotlight. I didn’t know what to do though I was familiar with the poem ‘An introduction’. I mean it’s one of my favourite poems. After a while people came and one by one all the empty chairs were filled. People who were unknown to me, totally strangers. I became nervous, yet again. I told the organizers beforehand that ‘i am going to talk less ‘ and they were approachable enough .

“Then … I wore a shirt and my
Brother’s trousers, cut my hair short and ignored
My womanliness. Dress in sarees, be girl
Be wife, they said. Be embroiderer, be cook,
Be a quarreller with servants. Fit in. Oh,
Belong, cried the categorizers. Don’t sit..”

So here it started. We all introduced ourselves. Some of them sang, which was an ice breaker for the discussion. Everyone had that broad smile on their faces. And once we started of with the poem, I was the one who started to put give opinions and  interpretation on the opening stanza or lines. I was actually moved by the lines she has mentioned in her poem. It’s so good. Shamelessly she is talking about sexuality and things which are a taboo in our society. My opinion was that why not? Why not to be fearless enough to love someone we want to. Why not to have sex or feel the pleasure even before marriage. Why not to wear crop tops and walk in the deserted or even the crowded streets. Why?

One by one everyone read the different stanzas of the same poem. Many different interpretations came, there was no right and wrong. Everyone was putting their words and pouring out their thoughts without any fear.

I was surprised, not only I was speaking but I was fully indulged in the discussion. I mean i spoke a lot. Gradually my fear became my strength. I no longer was a weak or other sex but felt equal to other gender too or maybe same gender but with lot of energy and enthusiasm. I  was full of zest and full of energy too The session turned out to be a “Soulful Conversation” for me.

Kamala Das and her poetry was a living breathing presence for me at that time . We all spoke about exposing our sexualities, we discussed orgasm, what is it to be a woman and what not. It was so great to be part of such discussion. I don’t think I have ever had such good time with people whom I don’t even know. And I’m glad that they didn’t judge me were listening to what I was saying . I feel that talking about anything or everything in front of unknown crowd or strangers is better. I mean I don’t know about others much, but I  comfortable enough to open up before strangers other than the people I know.

Some people who were familiar with Malayalam language, read out the original text by Kamala Das. As the discussion ended. We all just like a new family, spoke to each other. One on one . Shook hands, laughed, smiled. To keep up with the funky trend we also took a selfie.

I’m sure I ain’t going to forget this discussion ever in my life. I am looking forward for such discussions more and more .

Hidden pockets gave me a gift ‘ To Face My Fear’ and I will always cherish this gift ! Thanks Jasmine, Aisha, Sekulu and Aren.

-Nashafa Firdous Mir : I am a very moody and choosy kind of person. I am a weirdo and hardly I am comfortable enough to indulge into a discussion but this discussion was so good that I didn’t even feel uncomfortable for once.