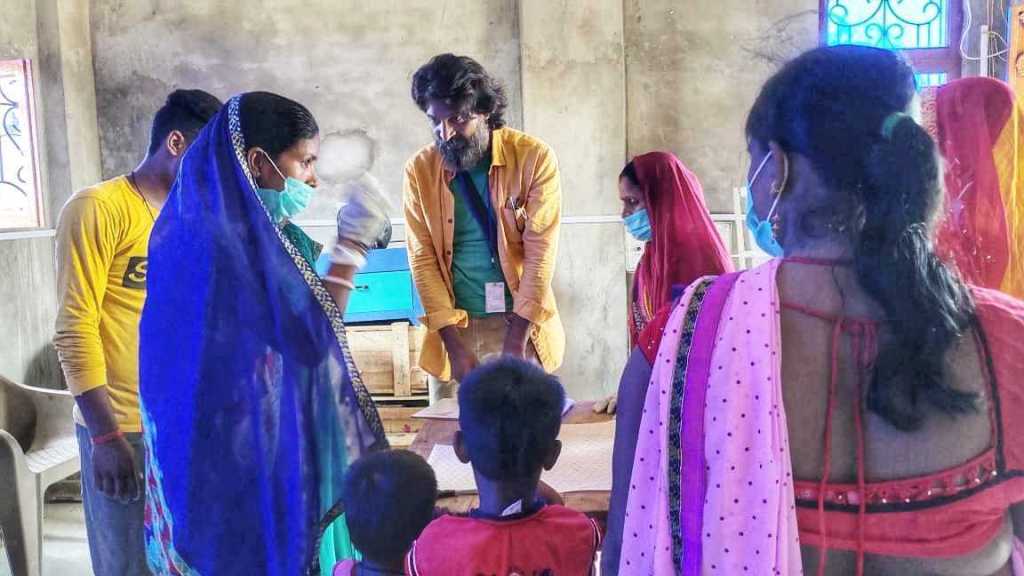 Hidden Pockets Collective believes in a Sexual and Reproductive Justice framework and approaches activism with this framework. The Collective is working on  alternative approaches that aim to achieve justice, not just being legal in nature, but a lot more comprehensive whether it is technology, collaborative research, or awareness-raising. We have ensured Sexual and Reproductive Rights have an intersectional approach.

Impact of criminalization prior to COVID-19

At our collective, we have been pushing for a decriminalization approach as punitive approaches have severely affected our communities.

We mostly works with adolescents and young adults. Young people frequently contact us for information related to their sexual and reproductive health. In India, anyone under the age of 18 is considered a child, and as a result, anyone under the age of 18 cannot consent to sexual activity. The POCSO Act (Protection of Children from Sexual Offences Act) criminalises all types of sexual expression with or between minors, including kissing, necking, and penetrative sex. The POCSO Act introduces a strict requirement of mandatory reporting of an offence and penalises individuals who do not comply with it with imprisonment or a fine. As a result, adolescents often restrain from seeking sexual healthcare. The POCSO Act does not recognise adolescent’s sexuality and treats them merely as vulnerable children. We also have worked with adolescents who end up in juvenile homes due to limited understanding of consent in the POCSO Act.

Unmarried sexually active young people often faced issues with unintended pregnancies as the MTP Act 1971 did not recognise (until recently) the legal right of an unmarried pregnant woman to terminate pregnancy citing contraceptive failure as a reason. This along with stigma around premarital sex, resulted in many unsafe abortions.

Working with adolescents and young adults, we realized that current laws are more focused on criminalization than protection. MTP(Medical Termination of Pregnancy) Act 1971 and, POCSO (Protection of Children from Sexual Offences) Act

For example; Medical Termination of Pregnancy Act 1971, until the recent amendment, did not recognise contraceptive failure as a lawful reason for terminating an unintended pregnancy for unmarried women. The law says for minors, written consent from parents is required. Pregnancy and abortion are both extremely time-sensitive issues, and prejudice against unmarried people, as well as legal complications associated with a minor’s pregnancy, can result in significant consequences. When unmarried women discover that the law does not recognise their right to terminate a pregnancy, they tend to turn to quacks, which can result in major health problems and even death. Sexual offences are often not reported by minors owing to fear of punishment and legal issues under the POCSO Act. The law does not recognise pregnancies that occur as a result of a consensual relationship between minors. This may cause minors to seek out dangerous ways of pregnancy termination.

Covid-19: Impact on our work

Often whenever there is a disaster, sexual and reproductive health issues and rights  often get neglected. In India also a lot of marginalized communities were left behind. Hidden Pockets Collective works with adolescents and young people. The covid-19 and subsequent restrictions caused a short term as well as long term psychosocial and mental health implications for adolescents and young people.

During the first phase of the lockdown, restricted mobility and the absence of SRH services from the essential service category resulted in an increase in unplanned pregnancies among sexually active young people. Contraception and abortion were not included in the essential category until activists and organisations, including Hidden Pockets Collective lobbied the government to include them. There was also a huge rise in domestic violence cases. We ensured that these conversations stay within the discourse of pandemic and responses.  We have been lobbying for telemedicine as a lot of people could not access services, and which further affected our communities.

There has again been an increase in demand for punitive laws, during Covid, which has further affected our work. Women do not how to access abortion services, there is censorship on internet spaces, and people don’t know how to access information. The punitive laws have not helped any of our communities.