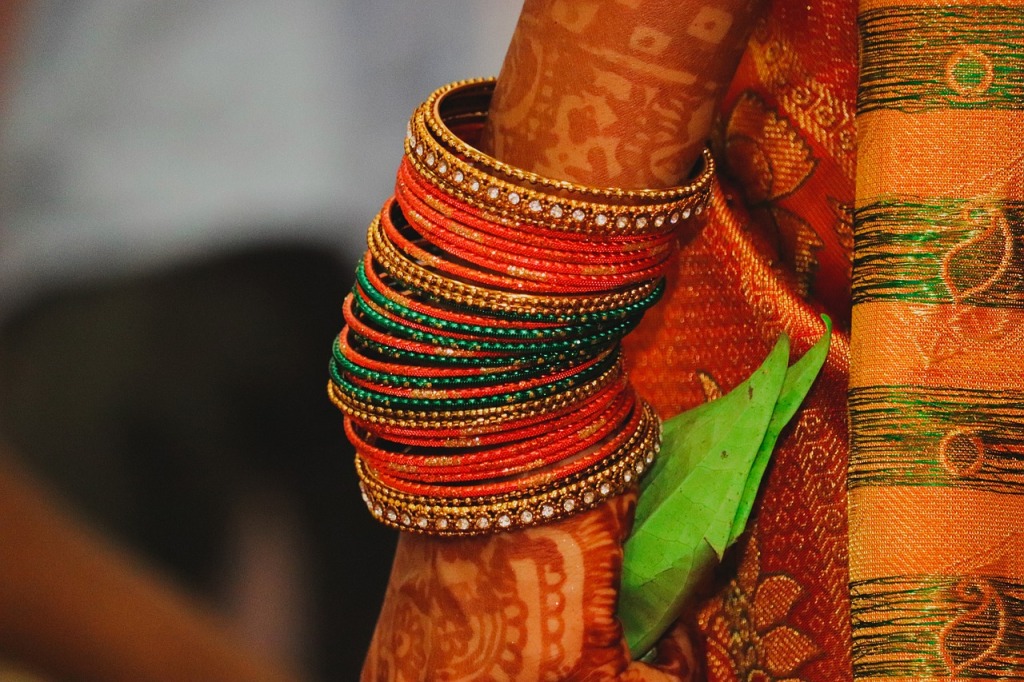 Do you remember the time in school when you first read about leaders like Gandhi getting married when he was just a child? His wife too  was a child then! Were you shocked, surprised, disgusted, or amused? When the realization dawned on you that he or his wife were the same age as you are when they got married, you probably brushed it off saying “those were ancient times, we are living in modern times now!.” But what if India right now is en route to make marriage legal only if you are 21 years old, in plain speak: if you are a woman you can marry only when you are 21 years or above? Will you call that being “wow, ultra modern!” or “erm, what is going on?”.

Recently HPC (Hidden Pockets Collective) and PLD (Partners for Law in Development) conducted a Tweetathon that added to the age of marriage debate growing in the net spaces. The Tweetathon themed ‘History of Child Marriage in India’ saw an interesting exchange of information from the activists, academicians, and the wider public on a wide range of questions on child marriage. Drawing from the Tweetathons, we reached out to three active participants Dr. Sreeparna Chattopadhyay, Independent Researcher, Bangalore; Udita Chakrabarti, Communications and Knowledge Officer, PLD (Partners for Law in Development); Munawwar Abdullah, Program Officer, Vikalp  to share with us more on the age of marriage debate.

The roots have the solutions:

All three of them firmly believed that increasing the age of marriage will not yield results to solve the problems of high Maternal Mortality Rate (MMR) and poor nutrition. These are problems that arise due to many socioeconomic factors and thus need multisectoral approaches for solutions.

Sreeparna said, “The policymakers are very familiar with the nuances of the problem with regard to poor maternal health and nutrition. It is no news to them that unless the systemic problems that cause these are addressed, nothing can change. So what is the point of increasing the age of marriage to 21 for women?”

Numerous studies have shown that poverty, inadequate nutrition, lack of education, poor access to healthcare services play a huge role in poor health outcomes for women. It is yet to be ascertained with the evidence of age-specific data on MMR and nutritional status that increasing the minimum age of marriage to 21 for women can indeed help solve all these.

Sreeparna pointed to the fact that the high MMR is not uniform throughout India. She explained that many states do not have high MMR. However, a few states like Assam and Bihar have very high MMR. And this high number has little to do with the age of marriage but everything to do with the problems of development and poverty. The age-specific MMR data may not provide adequate evidence to increase the age of marriage.

To improve nutrition levels, the state needs to improve  food security. With the current schemes, people are not getting the needed food supplies that will ensure them good nutrition. Sreeparna said, “Many women enter adolescence being anemic. And the same women enter pregnancy later.” She explained that the age of marriage makes a difference if it is 14 years versus 18 years, but not if it is 18 years versus 21 as far as maternal health is concerned.

Udita said, “Child marriage takes place largely in the context of marginalization now. When people have limited options for a better life, they think that marriage could be a way out for their children.”

Munawwar, based on his extensive field work said, “The existing systems/ institutions have no monitoring mechanism. Marginalized people are not empowered to ask questions to avail what is rightfully theirs. They have no one to turn to to solve their problems or hear their grievances. Many panchayats show many biases in distributing the allotted schemes and their authority and power remain unchallenged.”

Sreeparna drew attention to the gender disparities that make the marriage problem worse. In many communities birth of a girl child is still frowned upon and the neglect towards her starts right from her birth. She  grows up amidst all of these, her education not being a priority and when she does get married, she is expected to birth a child within the first year of marriage. Sreeparna said that in her research on violence against women, she has seen numerous young women who went through this ordeal as they were forced to have a child amidst the fears of being labelled as barren women or worse being abandoned by their husbands. Thus to “secure” the marriage many women deliver a baby within the first year of marriage. She stressed the importance of challenging inequitable gender norms and the need to change such normative practices before we rush to legislate on the age of marriage from 18 to 21 for women.

The existing laws and child marriage:

With the cultural sanction and customary practices, many adolescents still continue to be married before they attain the age of 18. Many of these marriages go unreported. However, when they do get reported, it is mostly due to parents and communities’ angst against an adolescent who has married someone they don’t approve of. Many self arranged marriages involving adolescents were thus challenged by the parents using the very same laws that were meant to protect and not punish them. The agency of an adolescent becomes irrelevant in all these marriage spars.

All the experts and participants we spoke to agreed that laws such as the PCMA (Prohibition of Child Marriage Act) has played a role in decreasing the rates of child marriages. However, they did point out that in spite of having laws there still are numerous instances of child marriage. Many of these get reported due to the works of NGOs, activists, social workers who work with the communities and panchayats. They said it is not just enough to increase awareness about these laws, but also extremely important for the state to create conditions to prevent child marriage.

Sreeparna said, “Amidst poverty, lack of security for adolescent girls even in their own homes (this is especially the case for urban poor or migrant populations who do not have secure dwellings), the constant threat or incidence of sexual violence against adolescent girls, poor prospects to have an education or get a job, many parents think that it is best to have their daughters married. For them, it is a choice between having their daughter relatively safer with her husband or having their daughter in extremely insecure circumstances.”

Manawwar said that in spite of having laws, the pandemic has also resulted in an increase in child marriages. He explained that during the pandemic, with numerous uncertainties about financial security and future, and also the new regulations of allowing only 15 to 20 people to attend marriages, many parents promptly got their children married with minimal expenses.

As a COVID19 response from Vikalp, 17 villages in Rajasthan which had high numbers of child marriages were identified and Learning-Education-Centres were established in these villages. Munawwar said, “Through these centres we have 450 children from the age group of 8 years to 13 years who are thus protected from child marriage and child labour.”

Adolescents, POCSO and age of consent:

The POCSO Act (Protection of Children from Sexual Offences Act) treats any sexual activity under the age of 18 as a punishable offence. In India, the legal age of consent is intrinsically linked to the age of marriage 18 for women. If the age of marriage is to be raised to 21 for women, much needs to be discussed about the existing cultural norm and expectations that sexual activities can happen only within the institution of marriage! Surely, adolescents, as well as adult women under 21, will not wait for the green flag from the law to engage in sexual activities!

If the age of marriage becomes 21:

It is highly undesirable but if the minimum age of marriage becomes 21 for women, then there will be far-reaching consequences. Udita said, “For women who are legally major at 18 and categorically are adults, it will be a setback if they choose to marry or are married below attaining the age of 21. Marriages will continue to happen irrespective of the new legal age 21 but what is problematic will be that this will bring their marriages under the purview of the laws regarding child marriage.”

Udita further explained that in most states of India, child marriages are now voidable where the girls can opt out of the marriage within two years of attaining majority. Given the additional conversation and attempts to make all child marriages void ab initio instead of voidable, this translates to them being deprived of protection from the law. “In such circumstances, a greater number of girls who will continue to be married will now be stuck in their marital homes bereft of matrimonial rights because their marriages will not be recognized in law,” she added.

Udita highlighted that such a new law can be highly distressing for already vulnerable and marginalized populations. She also noted the possibility that the new law can be misused extensively against marginalized adolescents along the lines of the current laws being misused by parents and communities who do not approve of self arranged marriages.

Sreeparna said that even with existing systems there is a serious gap to ensure there is access to sexual and reproductive health information and quality services for all adolescents and women, irrespective of their marital status. There is no Comprehensive Sexuality Education (CSE) curriculum in many schools. Sreeparna said, “In such conditions, if the age of marriage becomes 21, how will the women, especially the unmarried women, have autonomy and access that will help them make informed decisions on safe sex and preventing pregnancy.”

An expert (who did not wish to be named) said, “Many say that Muslims have personal laws which permit marriage at age 16 and this is unfair. What many fail to understand is the threat Muslims are currently feeling under the majoritarian politics in the country.”

The expert elaborated a case where, in the post-Mumbai riots of 1992, a Muslim couple felt very unsafe in the lane that they lived as it had come under attack during the riots. They feared it was unsafe for their daughter (who was not yet an adult) to be sent to school. Thus having not many options to ensure her safety, they had to arrange the marriage for their daughter.

The expert said in all the conflict areas the age of marriage decreases as parents think marriage is a relatively secure choice for their children, however the outcomes of these marriages may not be the best ones in reality.

If the age of marriage is increased to 21 for women, much is to be seen how it will pan out for Muslims in the country who are already under severe threat and attacks from majoritarian politics. The new law can turn out to be another weapon to punish Muslims.

The new law will neither prevent maternal deaths, nor improve maternal health or adolescent nutrition, which is the intention of the state. Instead, it will infantilize women and prevent them from exercising autonomy in marital, sexual and reproductive decision-making.

Dr. Nishitha Aysha Ashraf is Programme Associate for the SAAF Project at the Hidden Pockets Collective. She completed her B.A. Journalism & Communication (2010) and Bachelor of Dental Surgery (2015) from Manipal, Karnataka. She has covered the Nipah outbreak in Kerala during her stint as Health Reporter with The News Minute (2018). The reportage furthered her interest to be a key player in public health/ community health. Her internship and work at SOCHARA – Society for Community Health Awareness, Research and Action (2019) was instrumental to learn more about the People’s Health Movement. She is keen on exploring the SRHR issues of Kerala, especially those amongst the Muslim and Christian communities.